A true architectural patchwork, Alexanderplatz juxtaposes symbols of communist power such as the 365-metre high Fernsehturm, Karl-Marx-Allee Avenue, the Fountain of Friendship between Peoples and the socialist mosaics with those of the huge shopping centres and modern buildings.

More than any other square in Berlin, Alexanderplatz bears witness to the upheavals of Berlin's history and bears the marks of successive rival political regimes.

History of the square Alexanderplatz

Originally a modest market place on the outskirts of Berlin, Alexanderplatz ("Alexplatz" for Berliners) became an important correspondence centre at the end of the 17th century. In 1805, this former market was named after Tsar Alexander I, an ally of Prussia against Napoleon. Evolving over time, it became during the Belle Epoque (end of the 19th century), the archetype of a large town square with worldwide ambitions. In the middle of the square stood a 7.50-metre-high statue of Berolina, the personification of the city of Berlin and in Latin the name for Berlin (see picture above).

Very lively and a source of inspiration, it served as a setting for the writer Alfred Döblin in his eponymous novel "Berlin Alexanderplatz". At the time, the square was known as a place of entertainment, where workers from the northern and eastern districts of Berlin would come to the many shops and cafés on the square to buy their wares.

The square was badly damaged during the Second World War by bombing and street fighting in the last days of the war, and it was in need of initial restructuring. This will be done under Soviet influence ...

Respectively to the division set up at the end of the war, Alexanderplatz is under the communist yoke which makes it a real showcase of the socialist architecture of the time. Reconstructed on the ruins of the Second World War, the square no longer has anything in common with the lively square that had inspired Döblin 30 years earlier.

Against a backdrop of rivalry against the capitalist enemy, the architects of East Berlin saw things in a big way and reinvented Alexanderplatz as the nerve centre and true showcase of communist architecture and way of life: East Germany a modern and sophisticated country.

In this sense, Alexanderplatz becomes three times bigger, is covered with functionalist (and charmless) monumental buildings, is dressed in mosaics and adorned with new Soviet-style buildings still visible today, such as: 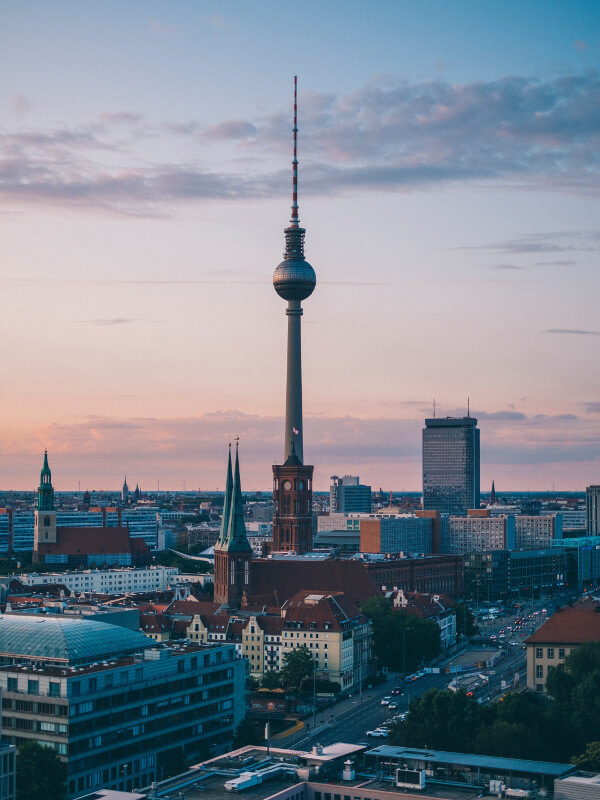 Located behind the Alexanderplatz railway station, the Fernsehturm dominates the Berlin panorama (as the east dominates the west). A true symbol of the GDR, it is also a source of mockery: also nicknamed "the great asparagus" (Telespargel) because of its shape, also called "the pope's revenge" due to a rather ironic natural phenomenon. The tower of which the East Germans are so proud adorns itself with a Catholic cross under the sun's rays - which, at a time when religious institutions were discriminated against under the GDR regime, makes one smile. Ironic, isn't it?

The frieze with the mosaic at the House of the teacher

The famous frieze of socialist style at the House of the teacher (1961-1964) by the artist Walter Womacka (see below) consists of 800,000 mosaic pieces and shows various symbolic scenes of life. The mosaic is dedicated to themes of the GDR: technology and research (north side), art and work (south side), friendship among nations (east side), life and society (west side). Typical socialist symbols such as doves of peace are depicted.

The relief on the House of Travel

On the eastern facade of the House of Travel (1971) there is a copper relief "Man overcomes time and space", a work by the artist Walter Womacka, who also designed the Fountain of Friendship between Peoples (see below) and the frieze on the Teacher's House. This relief measures 24 meters × 5 meters.

A rattle-shaped construction 10m high and weighing 16 tons. It consists of a pillar planted in the middle of a mosaic in the shape of a compass rose which supports a cylinder with twenty-four faces, each corresponding to a time zone. The engraved names of the world's major cities and the current time for each of the time zones can be read. The clock is topped by a mobile that depicts the solar system, which rotates in one minute.

It is a basin with a diameter of twenty-three metres and a height of six metres twenty. It was built from a variety of materials, including glass, ceramics, enamels, and copper. The water gushes from the top of the fountain and falls in spirals through seventeen basins of different sizes.

Later, as the communist regime faltered, the largest gathering before the fall of the Berlin Wall was held on Alexanderplatz. Up to a million demonstrators gathered to fight for individual freedom, calling for political reforms of the system. Artists, actors and prominent politicians came to speak on behalf of the people of East Germany. The demonstration did not focus on the ideas of reunification or the removal of the wall - it did, however, serve as an important step towards the reunification of Germany.

After the reunification of the two Germanies, it is necessary to develop plans to deal with an architecture that has aged badly ...

Alexanderplatz, after the fall of the Wall

While the redevelopment phase is still ongoing today, there are many plans to redesign some buildings and build more skyscrapers.

Today, Alexanderplatz remains the busiest square in Berlin, and it is also a place where you can literally immerse yourself in a history inhabited by contrasts.

Map, Address and how to get to Alexanderplatz