Celebrated every year on March 22, sold in porcelain to tourists, awarded in gold at the Berlinale, brightening the streets and reliefs of houses as well as other artistic objects, the bear is the favorite animal of Berliners. A ferocious, brave and dangerous animal, it is used as a symbol and emblem of the city - but since when? And why? The story behing the Berliner bear!

There are many hypotheses as to the presence of this heraldic animal on the coats of arms of the city of Berlin.

A symbol confirmed by History

In 1280 the first depiction of a bear on an official city seal appeared for the first time - only it didn't appear alone! The seal shows two bears supporting a shield on which the Ascanian eagle stands, representing the Counts of Brandenburg who ruled the region at that time. Since then, the bear has been a recurring image of the people of Berlin.

Over the course of time and the vagaries of history, the city's coat of arms has evolved and the two animals appear together in various positions relative to the balance of power between the bourgeoisie and the feudal lords: the bear is sometimes standing, sometimes lying down, held on a leash by the eagle, dressed in a collar, its hair straight, smooth...

Until 1790, the eagle seized the bear in its talons, symbolizing the submission of the city under the authority of the Hohenzollern.

In 1875, following the victory of Wilhelm I, who became Emperor during the War of 1870, making Berlin the capital of the German Empire, the collar was removed, giving the bear back its wild appearance. The lords losing control of the territory, in 1920, eight cities, 59 municipalities and 27 surrounding estates merged to form the "Greater Berlin"; the eagles disappeared for good and the bear became the only animal symbol of Berlin.

The bear, animal and symbol of the city of Berlin

Today, the official symbol, the one that only the Berlin Senate is entitled to display, represents a single trained bear with a red tongue and claws and above it a five-leaf crown and two red stripes. This symbol dates back to the enactment of the Act on the Emblems of Sovereignty of the State of Berlin on 13 May 1945. 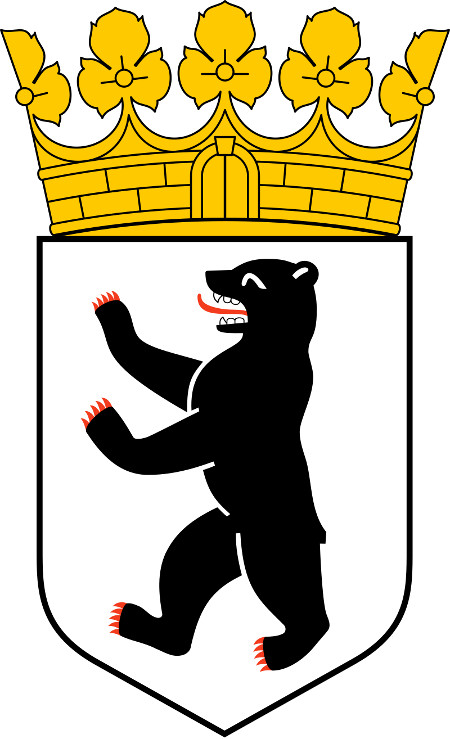 No answer! None of the hypotheses prevail over the others - Today it is still not possible to determine with certainty the exact origin of the appearance of the bear as a symbol of the city of Berlin.

In any case, here you are armed with several useful (and indispensable) theories to shine in society - anecdotes to be casually taken out each time a bear (a real one or a representation) crosses your path in the streets of the capital.