Located in the middle of the city of Berlin, the Victory Column is a warlike building, commemorating Prussia's military victories in its wars against Denmark, Austria and France. It was originally located in front of the Reichstag before being moved a few hundred metres further to its present location in 1939. It is an emblematic building of Germany and Berlin. And its ascent allows you to enjoy a magnificent panorama!

History and meaning of the Berlin Victory Column

Germany as we know it, with its borders and national identity, is a recent state. Indeed, Prussia, Bavaria, as well as the various German Länder, are an integral part of a political entity, the German Confederation. This confederation, which was created in 1815 and to which Austria, the Netherlands, Belgium and Denmark gradually joined, aims to politically replace the Holy Roman Empire dissolved in 1806. In this political system, each Länder has its princes and almost complete political power over its territory.

The attempt at confederation is a failure. This failure lies in the fierce internal struggle between the princes of the German Länder (Prussia, Bavaria, Hanover Länder, etc.) and the Austrian Empire; these internal tensions correspond to the shared desire to establish political domination within the confederation.

Without going into the details of the history of the German confederation (so rich and complex), the German revolution of 1848/1849 bruised German national sentiment. The Germans want to create a federal empire to which Austria is opposed. During the German revolution, two "solutions" were then proposed: the "small solution" and the "big solution". The "small solution" corresponded to the creation of a federal empire including modern Germany as we know it, part of Denmark, the Netherlands and some territories of Austria; the "big solution" would have included all of Austria's territory to the new empire.

It is in this context of unification that the wars against Denmark, Austria and France took place. The war against Denmark (1864) pitted Prussia against the southernmost principalities of Denmark. The second war (1866) pitted the armies of the German confederation and those of Austria against the Prussian armies. Finally, the war against France (1870/71) resulted in the loss of the territories of Alsace and Lorraine to Prussia. This period and these wars therefore correspond to the advent - and creation - of the Prussian empire, the dissolution of the German confederation and the rupture of political cooperation between the German territories and the Austrian empire.

When and why was the Berlin Victory Column built?

Built between 1864 and 1873, the column commemorates the victories of the Prussian empire - but also its creation - during the wars of unification. It was built by the state architect Heinrich Strack. Its original location was on Königsplatz (now called Platz der Republik), opposite the Reichstag Palace.

The column is ordered after the victory over Denmark. Subsequently, the representations of the other two wars completed the ornamentation of the column. It was inaugurated on September 2, 1871, on the third anniversary of the Battle of Sedan.

The column is divided into 4 levels: the base and its bas-reliefs, the rotunda and its mosaics, the colonnade and its cannons, the top and the statue of victory.

The base and its bas-reliefs

The base of the column is decorated with bas-reliefs sculpted by four different artists: 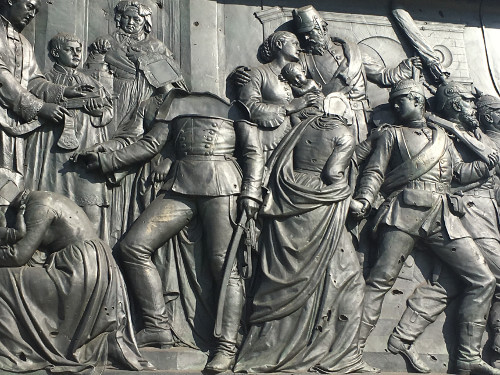 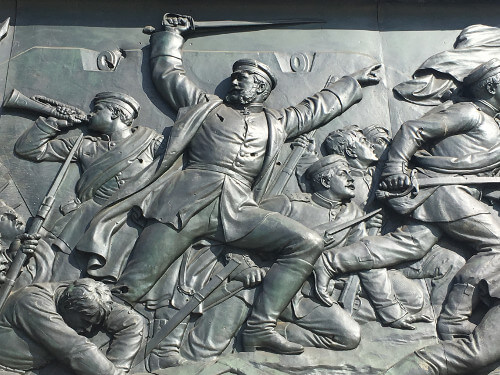 Of some bas-reliefs, only fragments remain, due to the destruction during the war but also during their detention by France.

Indeed, at the end of the Second World War, the French State seized three of the bas-reliefs. It was only in 1987 that they were returned to Germany on the occasion of the 750th anniversary of the city of Berlin.

The rotunda and its mosaic

The splendid mosaic of the colonnade is the work of Anton von Werner and represents the unification of the Prussian Reich following its victory over France. Following the Second World War, this representation was one of the reasons for the French request to demolish the column; the British and American governments strongly opposed it, while the USSR remained neutral.

The colonnade and its cannons

The colonnade was initially built on only 3 floors. Cannons covered with gold were inserted into the flutes of the colonnade, taken from the wars of the three reunification conflicts. They symbolize the triple German victory over the Danish, Austrian and French forces. In 1939, when it was moved to its current location, the colonnade was raised by one level. However, the last level will not have any cannons.

The summit and the statue of victory (Victoria)

The statue, the supreme symbol of the Prussian Reich's victory and domination over its enemies, represents the Greek goddess Victoria (goddess of victory) crowning the city of Berlin. It was built by the sculptor Friedrich Drake.

The incredible conservation of the column, despite the two World Wars and the numerous bombings in Berlin, is due to its relocation in 1938-1939. It was installed in the middle of the Tiergarten park, in an area of no strategic interest to enemy bombers.

It is possible and even strongly recommended to climb and go up to the top to enjoy one of the most beautiful views of Berlin, the Reichstag, the Brandenburg Gate, the TV Tower (Fernsehturm) and the Tiergarten Park.

Why is it worth going there?

The Berlin Victory Column is the symbol of the creation of the modern German state, its unification and identity. In addition, it is possible to reach the summit and enjoy a remarkable panoramic view of the city of Berlin.

Map of the Berlin Victory Column in Tiergarten (Siegessäule)

The Victory Column is located in the middle of the Tiergarten garden, at the crossroads of the great avenues Straße des 17. Juni and Altonaer Straße.

Take bus 100 and get off at Großer Stern.