Berlin's modern history is closely linked to that of communism. In the city, this heritage is still visible and the three Soviet memorials built in Berlin occupy a special place. These are the best places to gain a better understanding of Berlin's complex past and history. The first memorial is in Treptower Park, the second in Schönholzder Heide and the third in Tiergarten Park.

History, architecture and meaning of the Russian Memorial in Treptower Park

The Treptower Park Soviet Memorial is the most impressive of the three soviet memorials in Berlin because of its remarkable dimensions, characteristic of Soviet totalitarian art. Built in 1949, it is a reminder of the Soviet soldiers who died in action during the Second World War. In fact, the Treptower Park Memorial is also a military cemetery, home to the graves of about 4600 Russian soldiers.

The architecture of the site was designed by the state architect Iakov Bielopolski and the sculptor Yevgeny Vuchetich. The marble used for the site comes from the former chancery built by Hitler and destroyed at the end of the war. The symbolic importance of the site has made it a compulsory place of passage (imposed by the Soviet government) for all Western tourist excursions allowed in East Berlin.

On the front door of the memorial is a statue of the motherland crying for her children, behind two red flags guarded by two soldiers. Then there is an alley with sixteen tombs, representing the 16 Soviet nations of the USSR. At the end of the alley is the statue of the Liberator Soldier, which commemorates the victory of the Soviet peoples over Nazism. In the base of the statue is the cemetery mausoleum, decorated with mosaic figurations, a process characteristic of Soviet art that is very often found in Russia. 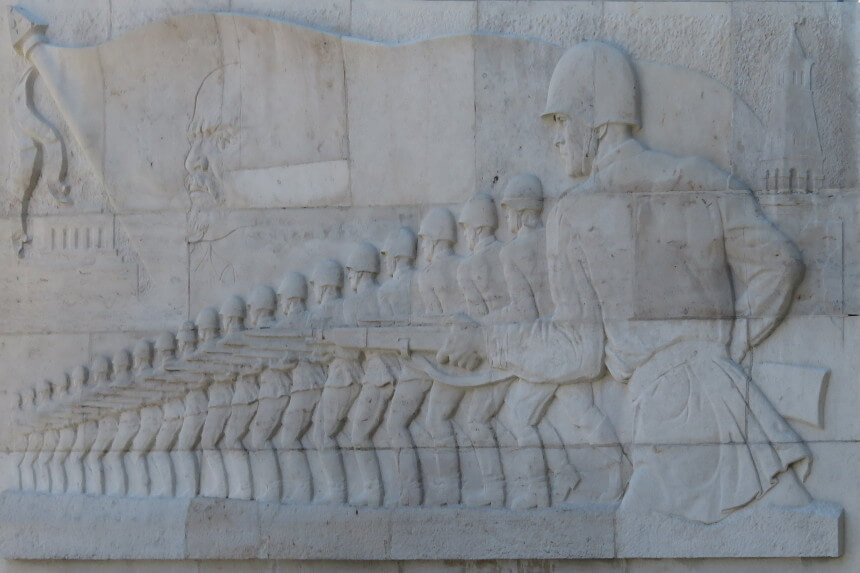 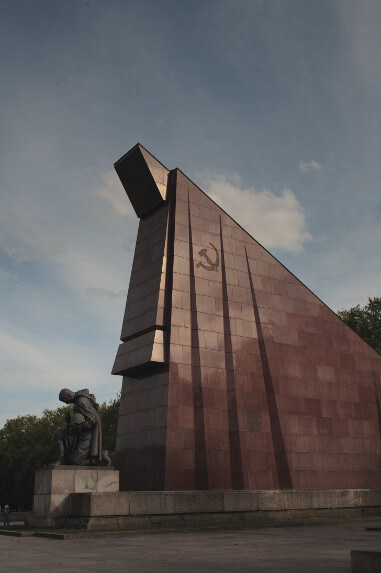 The statue of the Soldier-Liberator and the cemetery have often been the source of many controversies, mainly because of the swastika trodden by the Liberator Soldier's feet but also because of the many quotes from Stalin engraved in the cemetery. This grandiose staging of the Soviet victory over Nazi Germany was considered inappropriate in the light of an already wounded and rebuilding German people.

"For two decades the Red Army protected the peaceful reconstruction work of the Soviet people. But in June 1941 Hitler's Germany attacked our country word-breakingly, violating the Non-Aggression Pact in a brutal and wicked manner, and the Red Army was forced to go out into the field to defend its homeland."
J. Stalin

Even today, the soviet war memorial in Treptower Park is the preferred place for German Russians to meet on the national holiday of 9 May (Victory Day Day against National Socialism on 9 May, Russia's national holiday on 12 June)

The statue of the Soldier-Liberator

The statue of the Liberator Soldier, a gigantic 30 metre high statue built by Yevgeny Vuchetich, is the third piece in a triptych of monumental works erected in tribute to the effort made by the Soviet people during the Second World War.

The first statue of the triptych "The Rear Front" is in Magnitogorsk, a city famous for its foundries and armaments factories. It represents a worker trusting the sword he forged to a soldier.

The second of the triptych, "The Call of the Motherland", is located in Stalingrad and represents a female allegory of the USSR carrying the sword, haranguing the city to defend itself against the invader. The sculpture pays tribute to Stalingrad's heroic resistance to the Germans, this victory being considered one of the major strategic turning points of the Second World War.

The symbolism of the triptych, through the sword passing from hand to hand, makes it possible to highlight the three social components of sovietism, the worker, the people and the soldier, united during the great patriotic war. 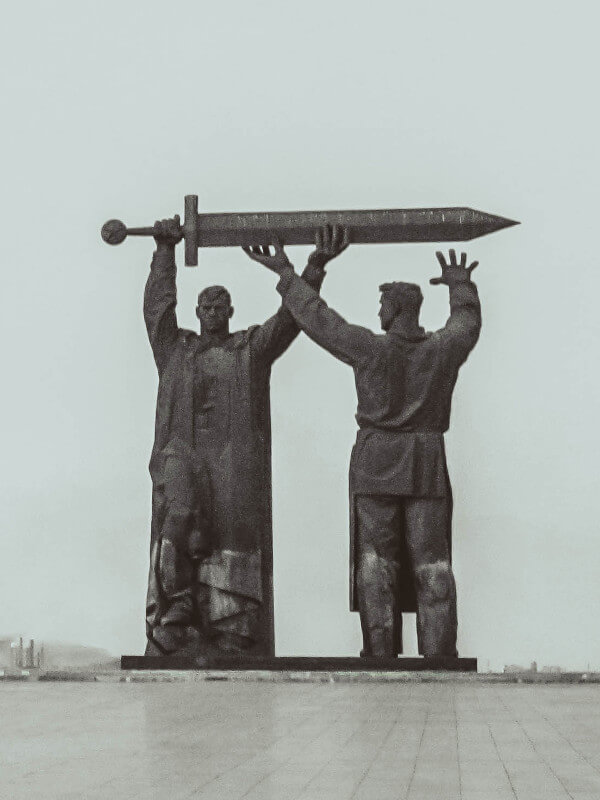 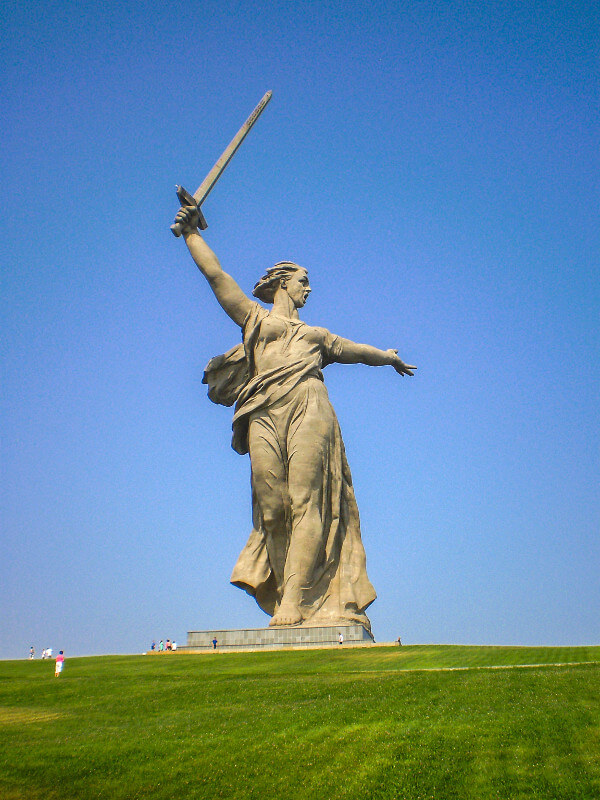 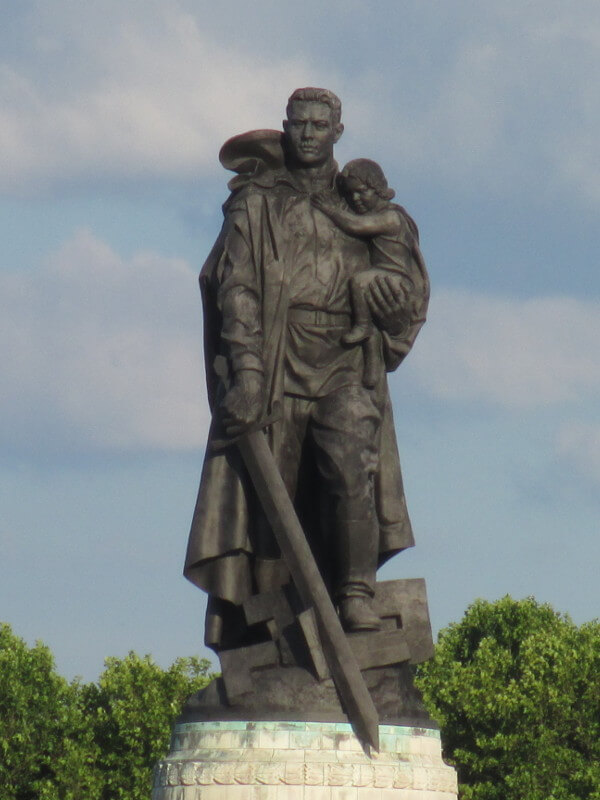 Tourists and passers-by should not be surprised to see 1941-1945 inscribed on the monuments. Indeed, the USSR only declared war on the Third Reich in 1941 following the end of the German-Soviet non-aggression pact, which allowed German forces to concentrate their forces on the western front.

Why is it worth going there

The Treptower Park Memorial is the most impressive of the three Soviet memorials in Berlin. Its size, its gigantic statue and its location in the middle of Treptower Park make it a unique and memorable place.

Map of the Soviet War Memorial in Treptower Park in Berlin

The Russian memorial is located in the Berlin Treptow-Köpenick district, 15 minutes walk from the S-Bahn Treptower Park station on the Ringbahn. The address is: Puschkinallee, 12435 Berlin, Germany.

The memorial is open every day, 24 hours a day.