You probably know about pretzels and have heard that Germans only eat sausages with potatoes? Well, think again! Although Germany is not especially known for its food and gastronomy, it is full of regional culinary specialities and traditional dishes that are often overlooked! So you want to know what is traditional german food?

Here is a list of the 25 best German dishes, from the most typical to the most surprising! 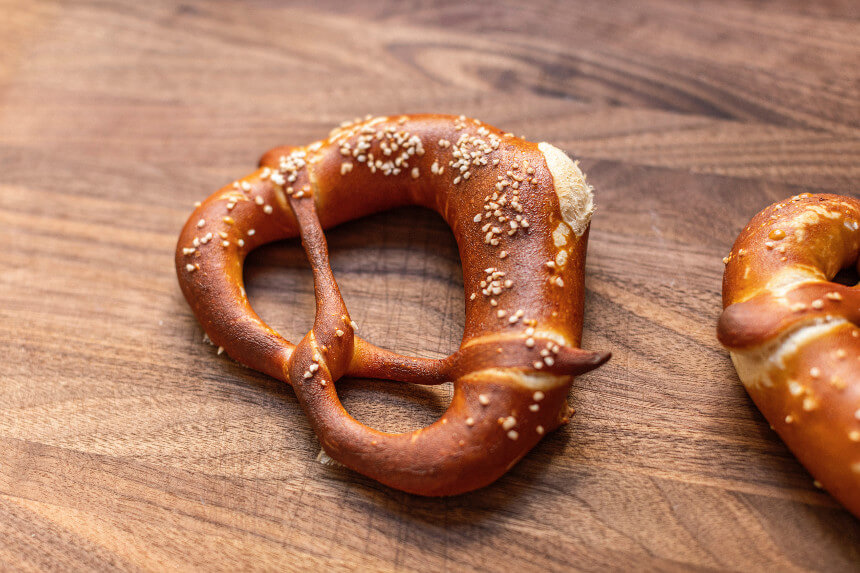 A true symbol of German cuisine, it is in fact a Bavarian speciality that is certainly found in other German cities, but not in the same way as in Munich, where it is eaten everywhere, at any time of the day and especially at breakfast with white sausages (Weißwurst) accompanied by honey-sweetened mustard and, of course, half a litre of beer.

The pretzel is a brioche bun made of salted dough in the shape of intertwined knots and covered with grains of coarse salt. Nothing like the small pretzels that we eat as an aperitif!

If you're in Berlin, here's where you can find the best (homemade) pretzels.

2. German Bread and the famous Brötchen 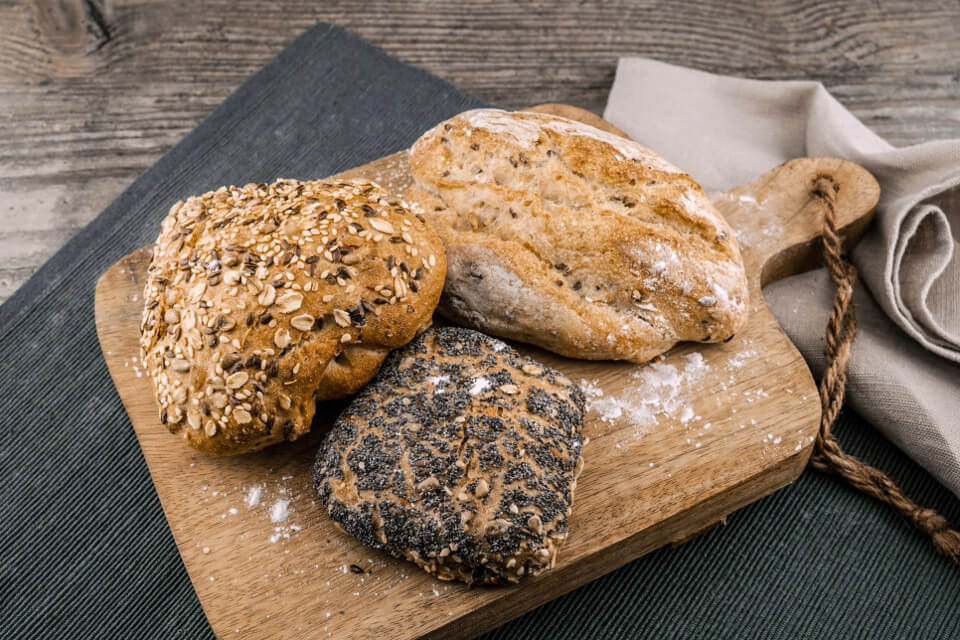 All kinds of bread and brötchen can be found in German bakeries: with sunflower, sesame or poppy seeds, with rye or whole wheat flour (or with semi-complete flour), etc. Unlike most countries and their white breads, Germans prefer wholemeal bread with darker crumb.

Brötchen are the name for small breads (which is what the word means in German). A German breakfast is not complete without Brötchen! And without cheese and sausages either... 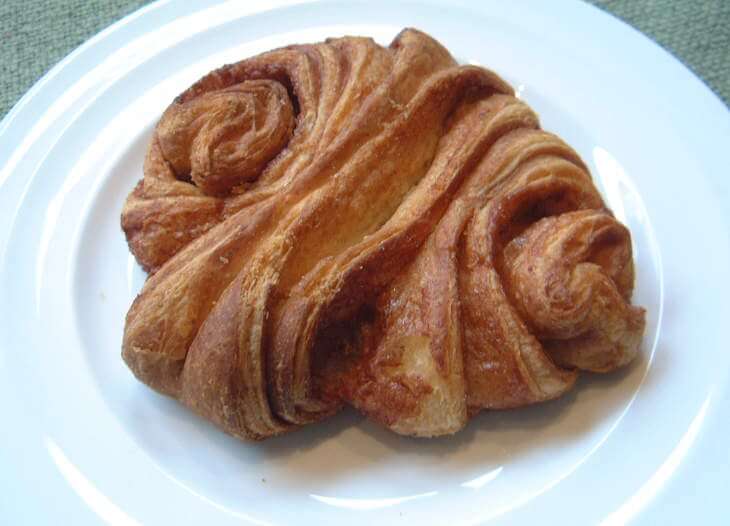 A typical Hamburg pastry, the Franzbrötchen looks like a cinnamon-filled croissant.

What better to accompany your cappuccino for breakfast than a steak tartare, of pork please, on a bun? And with an extra raw onion! This is no joke, it is indeed a dish or rather a sandwich that is very popular in Northern Germany, sometimes called Bauernfrühstück, the farmer's breakfast.

5. Knödel: the No. 1 German potato speciality

There are two kinds of Knödel: Kartoffelknödel (top of the plate in the picture) and Serviettenknödel (bottom of the plate). In reality, there are others but they are the main ones (the Grießklößchen for example made with semolina, cf. speciality n°17).

The first ones, the Kartoffelknödel, look like large potato balls, except that their consistency is more like that of a marshmallow. They are also called Klöße in Northern Germany. They are boiled potatoes, grated, mixed with egg yolk and flour and then formed into small balls and boiled again in water. This is personally not my favourite German dish...

Serviettenknödel are the salty counterpart of French toast, which is called armer Ritter in German. They are pieces of stale bread mixed with eggs, milk and onions and baked in water. They go very well with dishes in sauce (and soak them deliciously), as with Schweinsbraten for example (see below).

This is a potato pancake, usually pan-fried. There are many different recipes depending on the region, but the recipes are basically a combination of grated potatoes, eggs and onions. Kartoffelpuffer are often served with applesauce.

One of the most popular and well-known dishes in Germany, potato salad is a dish made of (just) potatoes with gherkins and onions in a vinaigrette or with mayonnaise.

That's starting to make a lot of potatoes! Germans eat 60 kg of potatoes a year, but 100 years ago they ate 4 times as many.

Named after the ancient German town of Könisberg, it is a dish consisting of meatballs in a white sauce made of meat broth, cream and eggs with capers. Although the appearance may seem unattractive, it is a great comfort when it is cold.

Eisbein is a delicious German culinary dish based on marinated pork shank, cooked in water in Northern Germany and Berlin in particular, or barbecued in Southern Germany (much better, I must say). The name "Eis-bein" (ice leg) originates from the time when the bone was used for ice skate blades.

Pork roast is a braised pork-based main course, usually served with potatoes or Knödel and other vegetables baked in the juice of the meat. It is written both Schweinebraten and Schweinsbraten, which simply means roast pork in German. It is the most popular dish in southern German gastronomy.

11. Currywurst: Berlin's most typical dish (together with Döner Kebab) 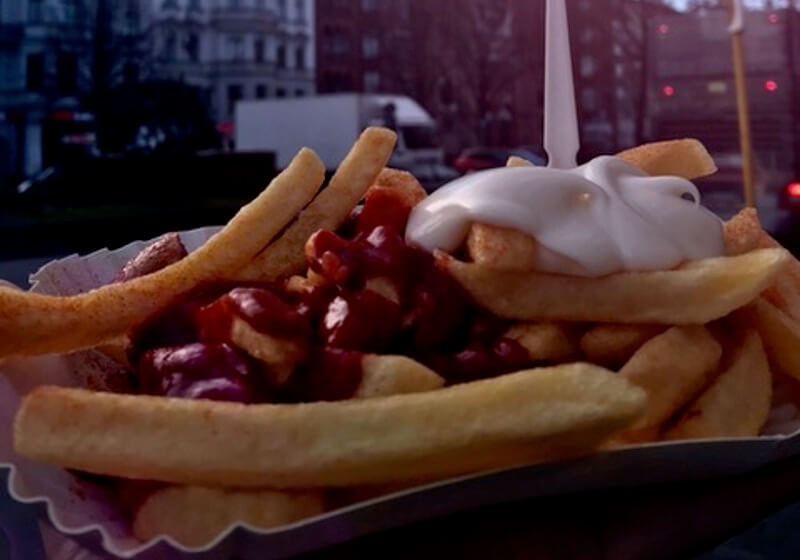 No need to introduce it: Currywurst has a reputation that precedes it. A symbol of Berlin's German cuisine, it is a sausage (grilled or boiled) served whole or cut into slices, accompanied by a homemade tomato curry sauce (or ketchup in most cases), sprinkled with curry powder.

Berliners are such fans that they have even opened a currywurst museum in Berlin! That's 800 million currywurst eaten in Germany every year. 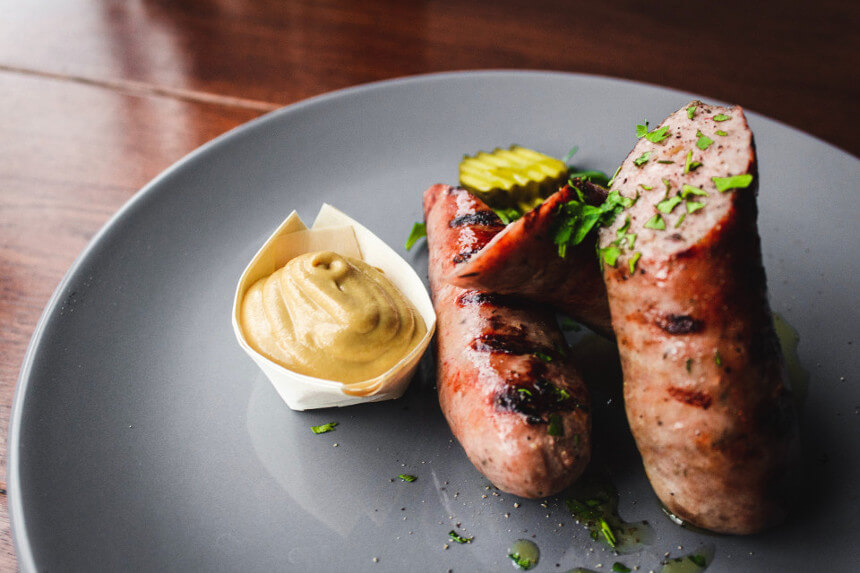 Sausage (Wurst in German) is probably the most typical German dish. Whether it is made from veal, beef or pork, it is eaten in all sauces, usually in a very small bun, a Brötchen, so that it overflows with it. The only exception is the tiny Nuremberg sausages, which can be found at every brunch.

Between the Brawurst, the Bockwurst, the Würstchen, the Weißwurst, the Nürnberger Bratwurst, there are more than 1500 kinds of sausages in Germany, if you were still doubting whether it is a popular dish!

Popular with Goethe, Heine and Kant, it is a simple and tasty dish made from turnips. The turnips are browned in a mixture of sugar and butter and then sprinkled with flour before being deglazed in a broth. It is a dish that goes very well with duck breast, Kassler or steak.

Typical German speciality made from cabbage cut into very thin strips and subjected to lacto-fermentation in brine, which gives it its slightly acidic taste (hence its name in German: Kraut: cabbage and sauer: acid). Sauerkraut is often eaten with sausages or Schupfnudeln, a kind of elongated gnocchi, a traditional food from southern Germany and Austria.

Speckkuchen is a type of quiche, pie or flan with bacon or bacon with a rye flour crust made from eggs. In some regions it contains leeks or onions. Speck means bacon and Kuchen cake.

Preparation based on grated raw potatoes, it is made into a paste cooked with onions to which dried meat or sausage and eggs are added. Depending on the recipe, garlic or chopped leeks may be added. The particularity of this dish lies in its cooking: cooked in a heavy frying pan, the dough is stirred constantly during cooking until the meat becomes crispy. It is also possible to make this dish simpler and to prepare it in the oven and to brown it.

Grießnockerlsuppe, which comes from Austria but is also part of the traditional Bavarian dishes, is very popular with Germans as a starter. It is a beef broth with Klöße semolina (see above the paragraph on Knödel) and chives.

Spätzle is a type of pasta from southern Germany (it is also found in Switzerland, Italy, Austria and Alsace). The word comes from Swabia and derives from "Spatzen" (birds) because of the resemblance of the dish to a sparrow's nest. There are many variations: grated, pressed, sliced - there is much discussion about which are the "real" Spätzle. Suffice it to say that the best ones are the homemade ones, with lots of love and cheese (Käsespätzle - are pasta AND cheese spätzle - Super lecker!). 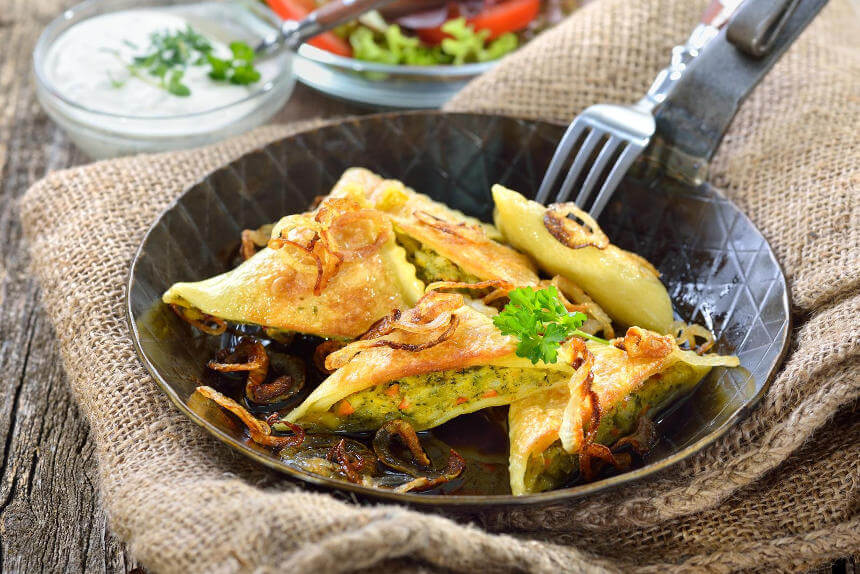 Homemade ravioli (well, not always...) of rectangular shape, the Maultaschen come from the German region of Swabia. They can be filled with different fillings (vegetables, meat, ...), cooked with water and/or in a pan. In any case, it's very good!

Straight from Austria, the Wiener Schnitzel is a breaded veal cutlet, served with a slice of lemon, cranberry jam and accompanied either by potato salad (see dish no. 7) or parsleyed potatoes and butter. A true national dish in Germany! Almost more than in Austria to tell the truth. Never tell a German that this is just a breaded veal cutlet...

The Kaiserschmarrn is an Austrian speciality that is very popular with young and old alike. It is a sweet main course (Süßspeise). It consists of a thick pancake coarsely cut into strips. It is usually served warm, sprinkled with icing sugar and accompanied by fruit compote (apples, plums or raisins).

The Kaiserschmarrn, made with a pancake batter lightened by the egg whites whisked into snow, is an "ennobled" version of the "Schmarren", which are simple rural dishes based on batter filled with fruit.

A traditional Viennese pastry, Strudel is a cinnamon-flavoured pastry made of several layers of buttered dough baked in the shape of a cylinder. There are variants of Strudel, such as the Apfelstrudel, whose filling consists of apples with dried fruit.

Glorified by Kennedy ("Ich bin ein Berliner!!"), the Berlin ball is a kind of doughnut in the shape of a ball fried in fat or oil, filled with jam or custard. Basically a doughnut without a hole in the middle. To prevent it from being too light, the doughnut is then covered with icing sugar.

Lebkuchen are the gingerbread of our country: sweet biscuits with spices (cinnamon, cloves, cardamom, ginger...). You can find them in the shape of a heart at the Oktoberfest, the famous Oktoberfest, which takes place in Munich in September. Although they were originally part of the "Christmas pastries", this is no longer the case today since it is possible to buy them all year round.

It is impossible to talk about Germany without talking about its beers. The cradle of the beer festival, the whole country is full of Bierpalast, Biergarten, Bierstube, Bierkeller, Bierhaus... No need to differentiate here between top and bottom-fermented beers - let's just enjoy them. Just one figure: there are more than 7500 different beers in Germany!

Berliner Weiße mit Schuss: A popular summer drink in Berlin, this is a drink made of beer and a shot (schuss) of raspberry syrup or waldmeister.

Hefeweizen: the typical beer of southern Germany, to accompany a breakfast consisting of Weßwurst (white sausage) with sweet mustard and of course a pretzel!

Even though it contains some beautiful vineyards, Germany is not very well known for its wines. However, there was a time when some German white wines were even more expensive than the most expensive French wines... yes! There are red wines but mostly dry white wines, Riesling being the king grape variety and Moselle the reference region. There are also sweet white wines with only 7% alcohol and with a more or less late harvest (Spätlese, Auslese, Beerenauslese).

Just as fun to drink as it is to pronounce, in German-speaking countries Schnapps is the name given to "spirits" distilled from cereals, roots or fruits such as cherries, apples, pears, plums... The real Schnapps is sufficient on its own, so that it is neither sweet nor flavored.